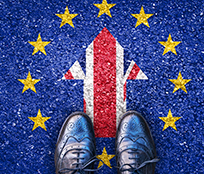 In August we wrote that financial markets were overpricing the risk of a ‘no-deal’ Brexit and our view was that such an outcome would be avoided. Within the range of alternative scenarios, our central case was that the UK would leave the EU with a revised deal.

With Prime Minister Johnson securing a significant majority at the 12 December general election, his ‘oven ready’ deal easily passed through Parliament, guaranteeing the UK’s exit from the EU on 31 January. However, amendments made to the Brexit Bill ensure that by law the transition period cannot go beyond 31 December 2020, again raising concerns about the likelihood and scope of any trade deal.

The value of the British pound tracked market optimism in the run-up to and immediately post the general election, and was followed by pessimism around the government’s imposition of a time limit for the transition period.

A Tight Timeframe but Some Ground for Optimism

Much of the commentary since Parliament’s approval of the beefed-up Brexit legislation has been based on a narrative that a relatively short timeframe for negotiating a trade deal implies either that any deal done is likely to be a bad one for the UK, or that no deal gets done at all. Beyond the overarching point that a tight timeframe for negotiation will focus minds on both sides, we are not convinced such negativity is warranted, for several reasons.

First, the EU has previously extended the offer of a Canada-style free-trade deal with the UK as previously stated by Donald Tusk, European Council President: ‘Let me make this clear; the EU wants a relationship with the UK that is as close and special as possible. From the beginning, the EU offer has been not just a Canada deal, but a Canada+++ deal’.

Second, given the significance of the UK as an export market for EU goods and services and the importance of the EU’s continued access to the largest financial centre, London, there is as much an incentive for the EU to reach a deal as there is for the UK. This is particularly true at a time when growth in the EU economy remains weak and vulnerable to downside risks.

Third, any trade deal will be seeking to replicate existing arrangements of zero trade barriers and regulatory alignment rather than create an entirely new regime, so it has a considerable head start compared to a scenario in which there are no prior regulations in place.

Last, with a large majority in Parliament, the government can introduce new legislation to extend the transition period if they feel it is in the UK’s interests to do so.

A Bumpy Ride Ahead but Growth Backdrop More Supportive

While UK financial markets will continue to remain volatile and react to trade deal headlines, we believe that the domestic macro outlook for 2020 looks somewhat rosier. Having ground to a virtual standstill in the second half of 2019, growth is set to rebound, boosted by extra government spending and a partial resumption in business investment. While this backdrop provides a solid platform, we expect a more significant boost to growth once details of the future relationship are clear. Using the playbook from the last three and a half years, we are fully expecting continued investor angst in the run up to what could be yet another last minute deal with inevitable compromises from both sides. Despite this uncertainty, Western Asset remains constructive on UK corporate bonds and the pound.