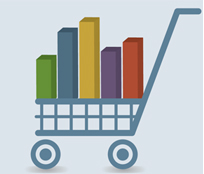 Because restaurant sales have been restrained by ongoing shutdowns and social distancing concerns, we have been paying more attention lately to Wall Street’s control measure than to our own. Is the slight drop in that measure in August a concern? Not at all. We were expecting some “pause” in that metric, and the observed drop in August is actually milder than we might have guessed.

That is, pent-up demand accumulated in March and April when retailing was forcibly suppressed across most of the country. Consumers made up for lost time over May-July by purchasing items that they were not able to buy in March-April. Thus, sales in May-July rose to levels way higher than February in sectors such as vehicles and consumer durables.

These overstated sales gains couldn’t last forever, and we have been warning of mild sales declines for these sectors. Much the same was expected for online spending, as consumers returned somewhat to newly reopened brick-and-mortar stores. Finally, grocery store sales were also due to flag a bit, as consumers’ usage of restaurants increased.

All these developments occurred in August, but only slightly. There are two crucial factors within the data to notice. First, while sales at all these (unsustainably strong) retail sectors have declined recently, they still remain way above pre-shutdown levels. Second, sales continue to rise at other store types, which did not get the benefit of unleashed pent-up demand in summer, further indicating that the declines in “overstated” sectors are merely a “coming to ground,” not a sign of weakness.

Thus, restaurant sales rose a nice 4.7% in August and sat “only” 16% below pre-shutdown levels. This is a remarkable achievement given the continuing strictures restaurants continue to deal with in facing the Covid crisis. Elsewhere, we also saw August sales gains at building material, furniture, electronics and apparel stores, as well as gas stations.

Two months ago, we asserted that consumer demand for merchandise (i.e., retail sales) had fully recovered from the Covid shutdown, with net-lower sales in place only at those sectors still being restrained. This remained the case through August, and over the last two months, we have seen some further progress in those sectors still laboring under Covid restrictions. The fact that retail sales continue to eke out gains is even more impressive given that sales growth was sluggish in the four months prior to the March shutdown.